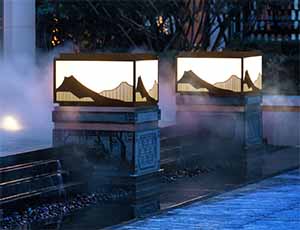 Post lights have a long history as garden decoration lights. In the era of kerosene lamps, noble families usually installed two kerosene lamps on the gate posts as lighting.

With the development of the times, solar post lights have replaced traditional post lights due to their environmental protection features.

Because of solar lights do not require wiring and are easy to install, they are more and more popular.

Today we will introduce more than a dozen solar post lights. These solar post lights are exquisite in appearance, powerful in function and reasonable in price. This article can be used as your buying guide.

If you are a wholesaler or retailer, you can contact us for detailed product parameters and quotations.

It’s very simple. You mount them on posts that you stake into the ground, and during the day the solar panel atop of the lights collects rays from the sun, charging the battery within so that energy can be utilized as light when it gets dark. The lights have an internal light sensor so that they turn on automatically at dusk, and off at dawn.

Whether showcasing your home’s architectural style or increasing the safety of your outdoor space at night, the Modern Minimalist solar post light can enhance the look and feel of your backyard in a snap. 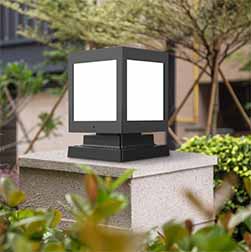 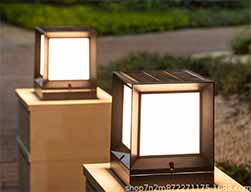 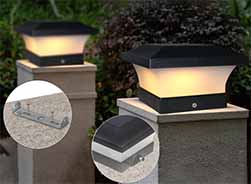 These three solar post lights are suitable for installation on doorposts or porches, and have the following characteristics: 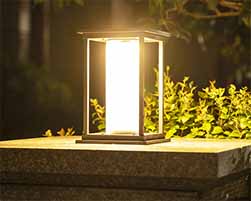 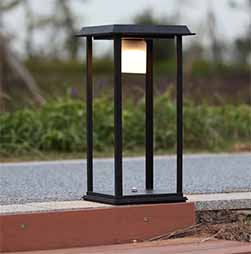 These two solar post lights are hollow in form, combined with die-cast aluminum and PC cover, with a simple and beautiful appearance.

The lamp body is made of die-cast aluminum, strong and durable.

In addition, it is equipped with a remote control, which can adjust the brightness, color, and timing function of the light.

The following environment is not suitable for installation:

Adds a decorative touch to your backyard or landscape, all while taking advantage of solar energy. Made of metal with glass lens, this traditional light provides a 360-degree display of warm LED lighting.

With no wiring required, installation, long-term energy savings and becoming beautiful has never been easier. solar lights gather energy from the sun during the day, then automatically come on at dusk to provide a pattern of light exactly where you want it. 8 hours at night on a full charge.

Fully weatherproof, durable for years of use, this light is waterproof and heatproof, making it a great choice for any sun-lit location. It costs virtually nothing to operate if you do not install a bulb. 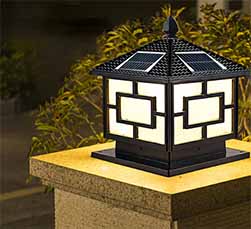 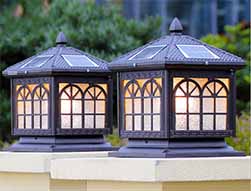 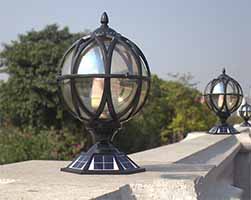 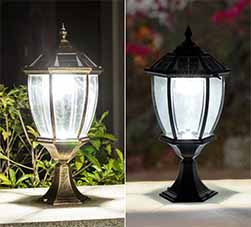 Modern art Solar Post Lights are created in a minimalist style, making them full of soul. These styles are all artistic re-creation on the basis of minimalism, using simple lines to outline new artistic effects.

These lights are installed in your villa to make it no longer lonely, thus becoming full of vitality and making you happy. 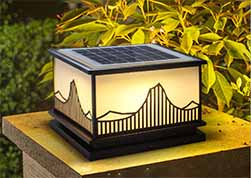 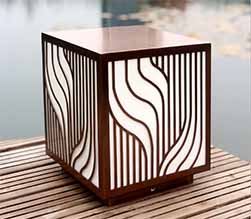 This light uses flexible lines to show the agility of water. Place it next to your pool. With the cooperation of the light, the water becomes agile, as if it has life.

We installed a wooden fence a few years ago and used wooden fencepost caps. What a mistake! Many have split and become worn, but with a never-ending array of home projects to tend to, replacing them had been low priority. However, we recently had some sand delivered for a project and the driver pulled his truck up to our fence and then dumped the load, completely breaking one of our fencepost caps in the process. Because there was now a broken fencepost cap to deal with, along with the others that were well deteriorated, we decided to investigate alternatives and discovered these solar cap lights. We had admired other people’s fences in our community topped with solar lights, so we thought we would give these a try. The solar lights arrived very nicely packaged. They were individually wrapped in a sturdy box. Each light was intact with no damage and appeared to be well constructed.

We immediately added the lights to our fence post but did not secure them with the included screw because we wanted to test them out for a week or two first. We had purchased solar string lights before that did not work properly or stopped working quickly, so we thought we would see how these do first.

Although the lights arrived late in the day and only had a few hours to charge—not the 6 to 8 hours outlined on the instruction sheet–they worked beautifully and have continued to work well since. They provide quite a bit of light. The product specs indicate that each cap casts 400 lumens, which is the equivalent of about 30 incandescent watts. Looking at the lights, this appears to be accurate.

The light is a soft white and lasts the whole night through. I am not sure if the same will be true in the winter when there is less sunlight, but even with minimal charging time, they worked well so we are optimistic. It is nice to have this extra light in out yard, especially since we have small dogs and sometimes must go out into the yard with them late at night or in the wee morning hours. Prior to buying these lights, our backyard had been a bit of a dark void, so it could feel a little spooky at times.

These lights enable us to see the dogs much better and even provide a bit of a magical feeling with their soft glow. Because these are motion-sensing lights, the lights brighten a bit when people get close to the round sensor on the cap, which is another nice feature. The only issue we have is that our posts are 3.5 x 3.5 inch, and these are 4 x 4 inch, so they are a bit large for our fenceposts; however, they are fine secured with the screw and do not look odd.

We debated building out the top of the post with some wood strips to make for a better fit, but we ultimately did not bother because we just do not have the time and read that a too tight fit is also not good for preserving the actual fenceposts.

Basically, we are looking to get a few more years out of our fence, and while it is not pretty to look at, these new caps help elevate our fence a bit. The posts came in a pack of 4 and we will likely be ordering more soon to replace some of our other really worn fencepost caps. We like that these are super easy to install—just press the button below the cap, pop the cap on the post, and secure with a single screw—making them manageable for people like us who are limited on time and not the most handy.

The white acrylic globe with sleek black polycarbonate base provides soft yet substantial lighting Install this lantern near your front or back entryway for convenient lighting. You can also use it as a modern accent for your front walkway, yard, or patio. Wherever you place it, you will enjoy the lantern’s inviting light and contemporary look.

The lantern is 13 by 12-Inch (H by D). It uses one medium-base soft A19 light bulb, 100-watt maximum (not included). Post sold separately. This Westinghouse Lighting exterior light fixture is Underwriters Laboratories listed for safety. It is covered by a five-year manufacturer’s warranty against defects in materials and workmanship. What’s in the Box-One-light Post-Top Exterior Lantern. 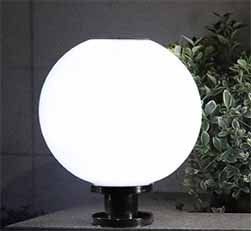 The Globe and 3 inch pole mount assembled OK , the instructions’ could be a little better regarding assembly and how to tighten the mounting screws, to the globe and also to the pole.
Assembly may be obvious to some but not for others!
After assembly I installed a 60Watt LED bulb, which draws only 9Watts lighting the globe nicely. 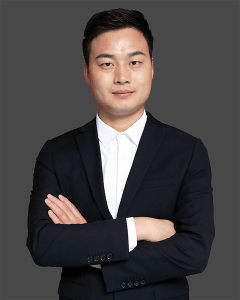